Sending Christmas cards via snail mail is so passé. Why spend the time and money for a bougie photoshoot, saccharine card design, and postage when you can use augmented reality to instantly dress up photos and videos to send to friends and family instead?

Luckily, there is a wide range of holiday-themed camera effects and 3D content for well-wishers to reinvent the time-honored task of bringing good tidings to you and your kin. And not only are many of them available in apps you likely already have installed on your smartphone, it turns out that most of the content is also more or less free!

For those of you reading this after the exchange of presents and the imbibing of eggnog, these AR experiences will also give you the opportunity to test out the specs on those new iPhones, Galaxy, or Pixel smartphones you may have received.

Over the past week or so, Snapchat (iOS | Android) has featured a rotating selection of holiday-themed Lenses. So, depending on when you read this, the availability of AR experiences will vary.

For instance, on Monday (or Festivus, depending on whether you revere the fake holiday founded by Frank Costanza on Seinfeld), a Bitmoji Lens featuring your cartoon doppelganger opening a Christmas present was available in the AR carousel.

However, by Christmas Eve, this Lens had already retreated to the North Pole, usurped by an absurdly adorable twerking pug with a Santa hat.

Between the two days, other offerings were more persistent, such as an ornamental beard, space heads, and Polaroid effects, as shown below.

Regardless, you’re practically guaranteed to find festive AR content in Snapchat through Wednesday.

But that’s not all. After publishing holiday-themed AR experiences via its standalone app that are unlocked when customers scan specially-marked cans, Coca-Cola has also leveraged the scan feature of Snapchat’s new AR bar to unlock Lenses in the same fashion. And we shouldn’t forget the previously-covered holiday promotion from fashion brand Gucci. 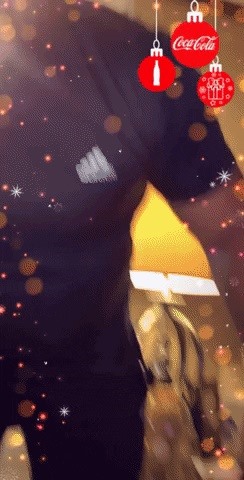 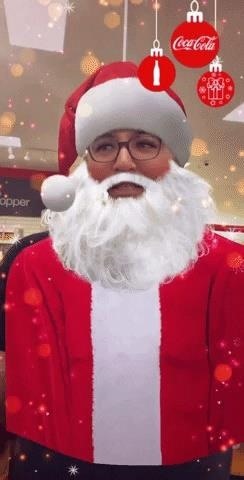 If you’re not among the more than 200 million daily active users on Snapchat, you’re more than likely on Facebook, Facebook Messenger, or Instagram, according to a report of the most-downloaded mobile apps of 2019. And there’s plenty of AR activities to be found between the three apps.

In my observation, the Facebook mobile app (iOS | Android) has taken on a hoarder’s mentality when it comes to AR camera effects. There’s still a 2019 Happy New Year camera effect available, for Pete’s sake, along with some leftover branded experiences from 2018’s Jurassic World: Fallen Kingdom. Luckily, the current holiday season effects are easily found at the front of the carousel.

For more variety, Messenger (iOS and play.google.com/store/apps/details?id=com.facebook.orca&hl=en_US) has its own set of holiday camera effects. Fans of voice-changing effects will not be disappointed, as Messenger includes effects for Santa, elf, and reindeer voices.

Messenger also has more diverse options. Recognizing that not everyone celebrates Christmas, Messenger offers a simple snowfall effect, as well as a Hanukkah experience.

For more musical fare, Instagram (iOS and Android) has a singalong camera effect in tribute to Mariah Carey’s infamously ubiquitous “All I Want for Christmas is You.” Along with framing the user’s face between the title in gold typeface, snowflakes flutter about the scene as the chorus plays, with the camera crash-zooming at the climax.

On the branded side, Canadian developer Access AR created a camera effect for Facebook, Instagram, and Snapchat on behalf of Warner Bros. to highlight another notorious holiday crooner, Michael Bublé. The experience appears to be most easily accessible via Instagram since that is the only option the developer shared. In addition, there’s the less musical Starbucks promotion that we’ve covered previously.

The Santa Tracker has been as consistent a holiday tradition as April Fools Day pranks at Google. This year, though, the festivities have spilled over into Google Search. 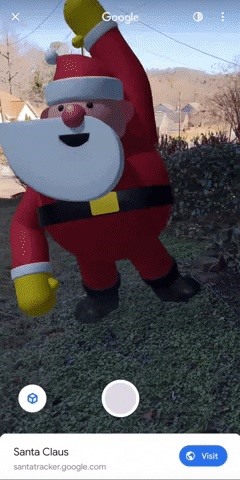 Now, thanks to the Scene Viewer feature of ARCore that enables AR content in Google Search, Android users who enter the search term “santa search” can place a 3D cartoon of Santa into their holiday scenes. The content also supports the new Depth API, so users can acquaint themselves with real-world occlusion as well (although, in my limited testing, the technology still needs some work).

In addition, the Google Duo app for iOS and Android has a few camera effects that are great to use when recording video messages. While Duo may not be as popular as Snapchat, Facebook, or Instagram, its camera effects are comparable in quality. 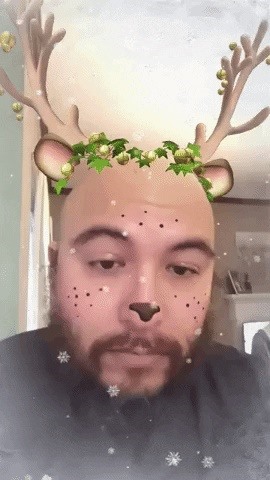 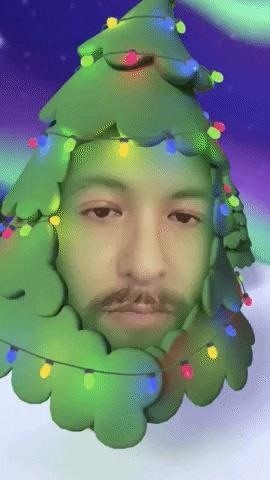 In addition to the previously-mentioned efforts from Coca-Cola, Gucci, and Starbucks, 8th Wall has delivered a few holiday-themed AR ads via its web-based AR platform.

First up, for those who crave some non-eggnog holiday libations, is Baileys Irish Cream. The experience simulates the creation of a whipped cream-topped Baileys cocktail, which users are able to top with various sweet and salty garnishes.

Next up to bat is Leo App, which uses 8th Wall Web to, coincidentally, promote its app for building AR scenes with multiple 3D models.

The web experience emulates the app, enabling users to place multiple objects in their camera view. Users are encouraged (via display ads embedded in the experience) to download the app in order to record their scenes.

AR App from Immersion Catches Santa in the Act

Finally, there’s a premium option for AR content on iOS. It’s called Santa Was Here, and while the app from developer Immersion is free, there are only two free AR effects available, with three other options available for $1.99 each via in-app purchase.

But the 3D content is of a higher quality compared to some other free holiday AR options out there. Upon setting an anchor for the AR experience, users are able to preview how Santa looks in their physical environment. Hitting the record button sets the scene in motion. In one experience, Santa waves for the camera before disappearing into a burst of magical glitter. In the second stock scene, Santa unpacks wrapped presents from his sack of gifts before evaporating into the ether.

Is it enough to justify unlocking the additional paid content? Or did we learn nothing from the trials and tribulations of Ebenezer Scrooge?

As you can see, there’s no shortage of options for expressing holiday joy this season. So take the time to be creative with these augmented reality experiences and share them with loved ones. Happy Holidays from Next Reality!

Don’t Miss: Deck Your Halls with Boughs of AR via IKEA Place & Other Holiday-Themed Apps