No Man’s Sky is a massive game and playing it in VR after the Beyond update is an immense undertaking. Let us help you out a bit with this guide on how to build and power your base.

One of the new features added in the Beyond Update for No Man’s Sky is the need to power some of the larger pieces of your base. Things like base computers, portable refineries, and wooden structures in general don’t need power still, but if you want to get that teleporter up and running or turn the lights on then you’re gonna need some electricity.

For this guide we’ll cover the basics of base building, how to get started, where to find new blueprints, what the game mechanics of building bases in VR are like, and importantly, how to power your latest and most beautiful creations.

If you follow the main quest line in No Man’s Sky, then you’ll gradually learn how to build simple bases and what the different core pieces of equipment do. For example, if you have a warp drive installed on your ship and can travel to new star systems already, then you’e more or less out of the early tutorial section and likely have a simple home established on your starting planet.

Early on you’ll learn blueprints (basically crafting recipes) for things like wood floors, wood walls, wood roofs, a base computer, and specialist terminals. I’m not going to cover that stuff specifically, as I’ll assume you’ve at least gotten that far if you’re interested in building larger bases. If not, I recommend you at least finish those early tutorial missions first and foremost. 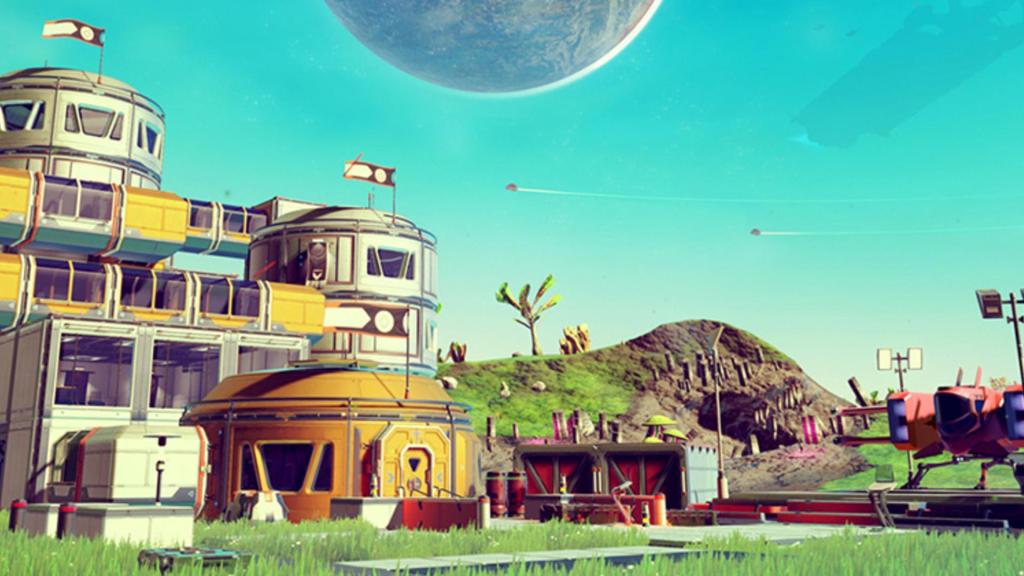 Base Building Basics in No Man’s Sky VR

Now the most important part of building a base in No Man’s Sky is planning and preparation. If you have an idea in your head of what you want to make and what you need to make it, then you can start stockpiling resources while you finish any preliminary steps ahead of time.

And while you do that, keep an eye out for Buried Technology on planets. When you use your Analysis Visor (holding your hand up to the side of your head and press the grab button on Rift S) you’ll see long-range icons of points of interest. Buried Technology modules look like a WiFi signal. Dig these up using the Terrain Modifier Multi-Tool attachment and you’ll get Salvaged Data, usually between 1-4 in each buried module. Save these up and use them to buy new blueprints.

For example, if you want to make a classical sci-fi base that looks like this one I just started or this one we built into the side of a mountain with circular rooms then you’ll need lots of prefab blueprints.  Or, you can stock up and research a bunch of wooden or concrete or other blueprints to get more freeform with it  all.

The No Man’s Sky wiki is a great resource to check before going into VR so you can plan ahead of time. 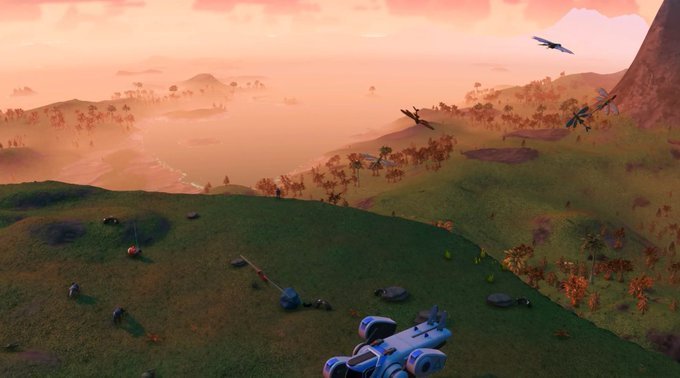 Generally speaking though, in order for the game to recognize something as a “base” all you need to do is build a base computer, that’s it. When you make a base computer the game will register the location as one of your bases, let you teleport there, and saves the icon on your map and compass to easily locate again. Anything you build around that base computer is considered part of your base.

From there you can do just about whatever you’d like. I usually start by making a large cylindrical room from the top of the prefab list because I like how it looks. From there I connect corridors to make other rooms and stick a door on the front so I can enter and exit.

You can build your base however like. What works well for me, something Kyle Riesenbeck, our Operations Manager, showed me when we were playing, is to informally designate themes for rooms in your base. So in the first big room I put my refineries, save beacon, research station for new blueprints, etc. Then I go through a corridor and setup my specialty terminals with the NPCs I’ve hired, sort of like the heart of my base. From there I’ll make another branch to install a teleporter, maybe setup a garden in another room or in an enclosure outside. You can get really creative with what you do.

But the more you build and add to your base the more you need power. The need for power is a new feature in the Beyond Update for No Man’s Sky and it’s a bit more daunting in perception than it is in reality.

Not everything requires power. For example, all portable technologies (the base computer, portable refinery, etc) all run on their own without external power sources. However, storage units, teleporters, and many other advanced parts require power. There are two fundamental ways you can power technology in No Man’s Sky: a Biofuel Reactor or the combination of Solar Panels and Batteries.

For long-term self-sustaining power the Solar Panels and Batteries are your best bet, but it’s nice to have a Biofuel Reactor handy as well just in case. I’ll talk about the differences next.

The first power blueprint you’ll have an access to in No Man’s Sky is the Biofuel Reactor. It’s…okay. The downside here is that it needs a constant stream of fuel, such as Condensed Carbon, like a gas tank. So you can’t just set it up and forget it.

I’d recommend skipping this phase and going straight to solar panels and batteries even though it will take longer to setup. Then you can make a biofuel reactor to have on standby in case you need more panels and batteries later on but don’t have the resources and just need to quickly access a storage unit or use your teleporter.

Scroll down to running electrical wires for power for more details on actually connecting power units to your base. 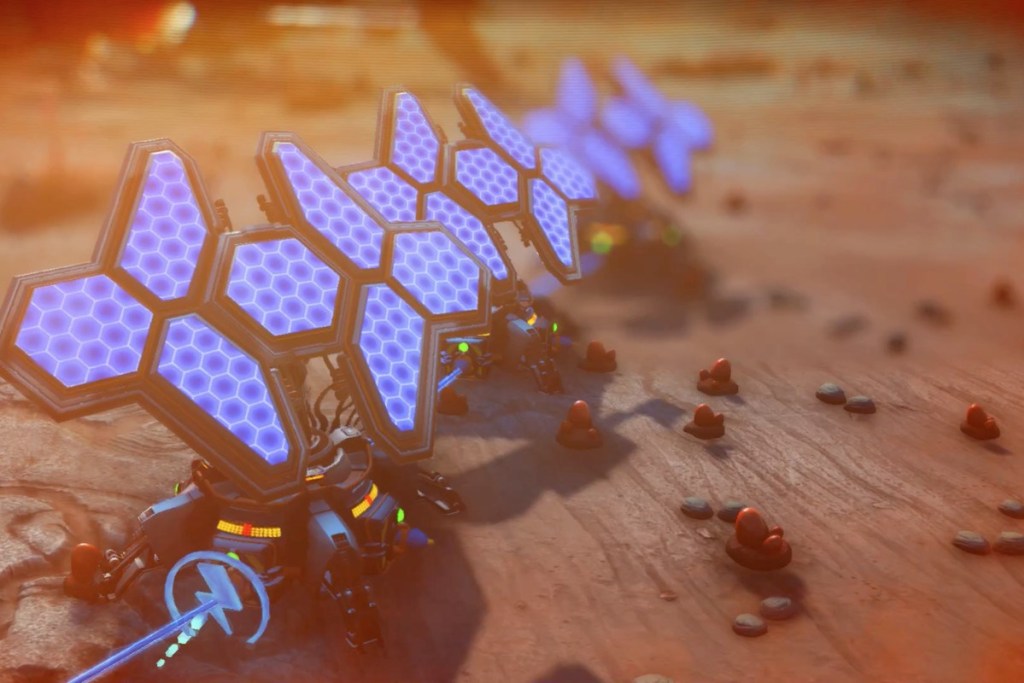 Solar Panels and Batteries in No Man’s Sky VR

Renewable energy is the future and present in No Man’s Sky. You can set up solar panels anywhere you want — even inside your base — and they’ll create power. It’s kind of silly, but it’s true, unless it gets patched to require them to be outside. However, it does need to be daytime for them to accrue power — they’ll shut off at night.

What you then have to do is connect those solar panels to batteries that can store the excess energy for nighttime that was not used up during the daytime. The more technology you’ve installed in your base, the more energy you need. 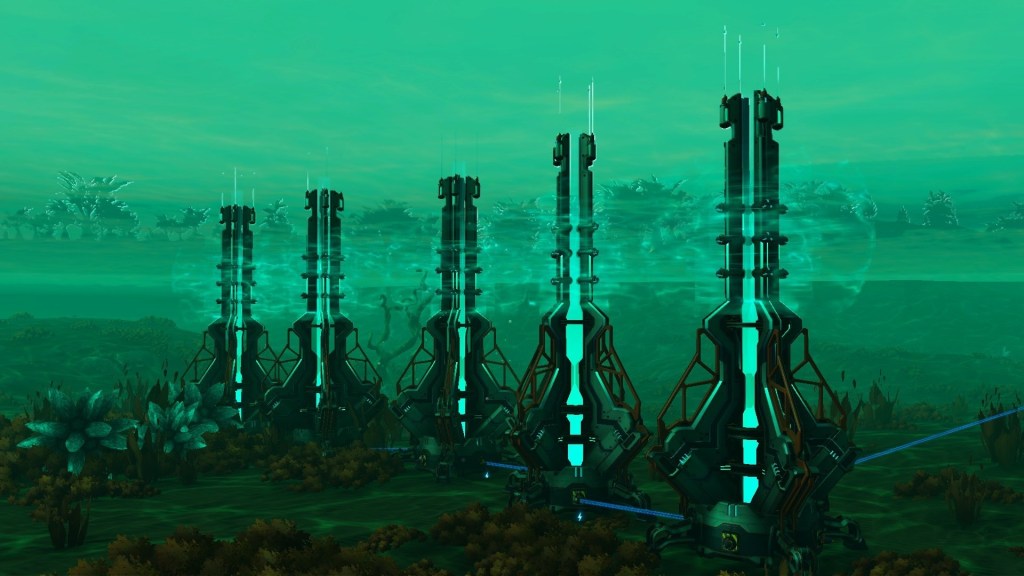 The final method of powering a base that we’ve discovered so far is the use of Electromagnetic Generators. You should be able to upgrade your Analysis Visor at the Space Anomaly using Nanites to add on the ability to scan for electromagnetic field energy sources.

Then you build and place these Electromagnetic Generators at the specific location and they’ll constantly supply a dedicated amount of energy. By building multiple on the same location, you can amplify your energy. From there all you’ve got to do is run Electrical Wires to your base and you should be up and running. Note that they’re quite expensive to create, so you’re better off focusing on solar panels and batteries initially.

In the image above, you can see the Generators are placed underwater at the base of the field. 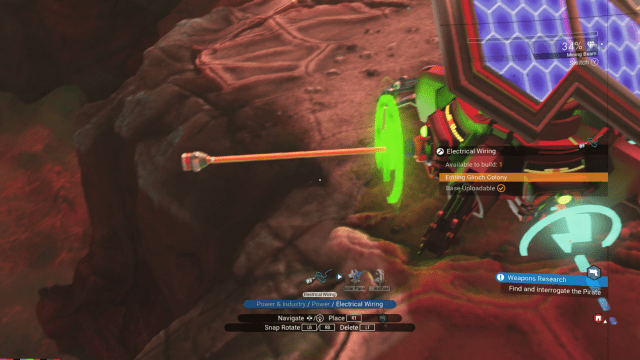 Having to run electrical wires across your base is easily the trickiest part of setting up in No Man’s Sky. Luckily, Electrical Wires are a free blueprint that cost zero resources to craft so you have infinite access to them at all times.

The trick to understanding what to connect where is to know what needs power and what doesn’t. Remember how I said I like the way prefab buildings look? Well the other benefit is that they have power connections on the exterior. And anything that is correctly installed inside the base (aka it locks into place correctly) will receive power if the base itself has power connected. This means you could set up a bank of solar panels outside your base, connect them all together, and then run a single wire to the base exterior outlet and have it power everything inside.

Wires can be extended from socket to socket, but you can also stop part way through to create a junction if you want to branch the wire or have it turn towards a new direction rather than stringing across your entire space.

This is the way to go, in my opinion. But you have other options as well. 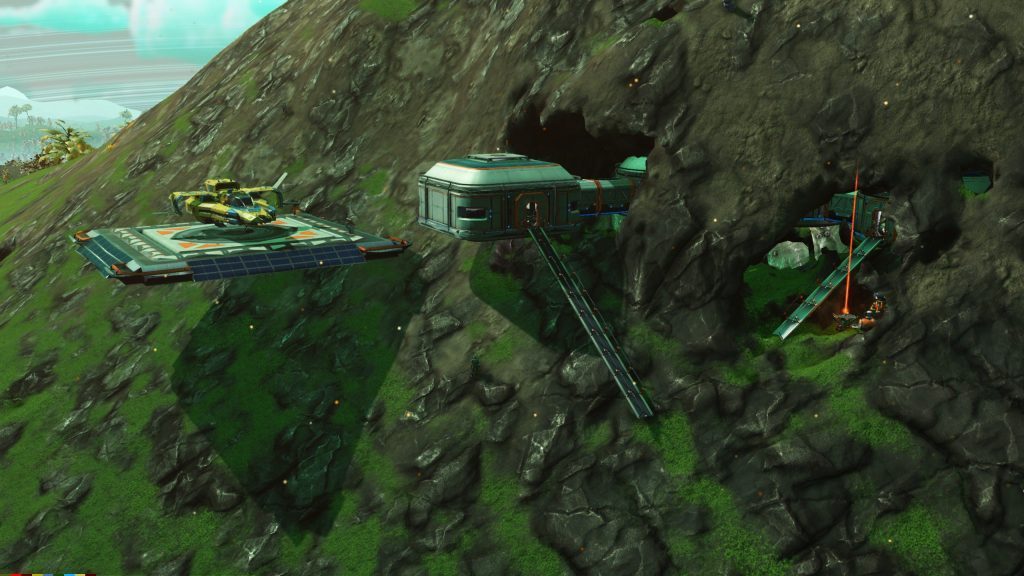 For example, if you’re not using Prefab buildings then you can place a Power Transformer  on the outside of your building then it will power what’s inside. Switches can be used to connect things with Electrical Wires this way.

And that just about sums it up for building and powering a base in No Man’s Sky. Let us know if you have any questions and if you want to see a video walkthrough of all this, we may make that happen as well.

For more on No Man’s Sky VR, make sure and look at our coverage hub where you can find our beginner’s guide for playing in VR, details on how to customize your character’s appearance, and our review-in-progress impressions so far.

Editor’s Note: After publication we added a section on Electromagnetic Generators.

The post No Man’s Sky: Beyond Guide – How To Build And Power Your Base In VR appeared first on UploadVR.