My significant other, who goes by the VR-alias Mint, is a veteran digital artist that didn’t believe her skills would transfer into expressing creativity in virtual reality. She did, however, believe in using virtual reality as a means to socialize with interesting new people.

[UploadVR regularly commissions freelance writers to review products, write stories, and contribute op-ed pieces to the site. This article is an op-ed from a regular VR user and fan of Rec Room.] 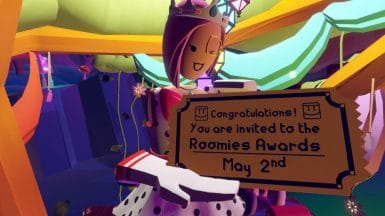 Like most other social VR games, Rec Room has an area where players can gather in front of a mirror to interact with each other. That’s how Mint met Neko, the person who’d eventually become her mentor for creating in the virtual metaverse.

When they first met, Neko would never speak, but that didn’t stop them from socializing. Whenever they happened to be in the same room, they used non-verbal communication like head-pats, hugs, and avatar emoticons. That progressed into using Rec Room’s virtual keyboard to exchange messages, but still no talking. That continued until the day Mint received an invite from Neko, which asked her to join a private room. In that room Mint heard Neko speak for the first time, among a group of Neko’s close friends.

It turns out that Neko is a renowned world builder, and Mint was awed with the magnificence of the worlds that Neko had created. Their friendship blossomed into a mentor-pupil relationship after Neko convinced Mint that she could learn to build too. Over several weeks Neko taught Mint the complexities of building in Rec Room. Without a mentor to teach skills like managing “ink usage”, Rec Room’s proxy for polygon count limitations, it would have been difficult to learn how to create detailed inventions within a tight budget. Eventually, Neko invited Mint to be a part of a six person team to compete in a world building contest called “The Roomies”. The Roomie Awards recognizes creators for everything from building worlds based on themes, to creating PvP mini-games.

This year’s theme was “Wonderland”. Their six person team took two weeks to finish the room. There were struggles, some people on the team were replaced, but they persevered. Their room, ^cozyrealm now has over 22,000 visits as of the time of this writing.

I play Rec Room with Mint almost daily. She usually uses the Rift S in our computer room, I take the Oculus Quest, and we meet up in VR to play Rec Room’s addicting paintball mini-game. Sometimes, Mint convinces me to take a break from competitive gaming, and explore more social settings. The days leading up to The Roomies was one such occasion.

She was excited to show me her team’s room, and to check out the competition for The Roomies. I was amazed by the beauty, and scale of ^cozyrealm. I saw orbs of light wisping through the land, a gorgeous day and night cycle, and I even got to name a giant caterpillar. Sitting over a high cliff, there’s a clubhouse for people to explore. Inside the clubhouse there were multiple hangout areas, including a room that featured 2-D art. In this room it became apparent to me that VR is the most versatile creative medium that exists. Showcasing 2-D art may have some parallels to art exhibits in the real world, but nowhere in reality can I be inside of these expansive Alice in Wonderland-like worlds. VR was used to create both what is possible in the real world, and what isn’t. 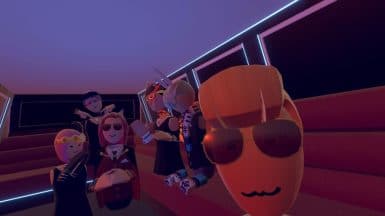 Around two weeks before the official judging for the Roomies, Mint received a box that contained a golden ticket. The ticket let her know that her team was one of the seven finalists chosen by developers from dozens of contestants. The ticket also gave a date of the awards ceremony, May 2nd.  On the night of The Roomies Awards, Mint spent hours deciding on the perfect attire. She finally decided on a fancy black dress, and dazzling gold jewelry. After meeting up with Neko, and the rest of the team in ^cozyrealm, they headed to the “before party”.

At the before party, they chatted with developers, and other finalists, and then headed to the red carpet room. They were directed to their own personal limo (shown above), which chauffeured them to the red carpet where developers were live streaming the event on YouTube.

The ^Cozyrealm team strolled up the red carpet to the award stage, which was also appropriately decorated in a wonderland theme. In the end ^Cozyrealm placed 2nd! They were also presented with a silver glue gun-shaped trophy. The glue gun shape represents the main tool builders in Rec Room use to create.

An afterparty was held, where champagne-like “Bubbly bottles” were popped, and a collage of pictures were taken. The awards ended late in the evening. We removed our VR headsets, and we were back to reality, inside our boring VR space at home.

I couldn’t help but compare the blandness of our room to the majestic wonderlands we’d witnessed. It’d be nice if our home was wonderland themed. I think reality can handle the polygon count, but it can’t keep up with the imagination.

For more on Rec Room read up on some of our picks for the best user-created worlds to visit and check out the Museum of Other Realities for more incredible VR art exhibits.

The post Rec Room Is A Constantly Evolving Showcase For Why VR Is The Future Of Creativity appeared first on UploadVR.