The Oculus Quest is one of the hottest VR headsets available on the market right now. Out of the box, the Quest comes with everything you need to get started. But after a bit of time with the headset, you might be wondering what other add-ons or accessories you can buy to improve your experience and make things a bit smoother.

[When you purchase items through links on our site, we may earn an affiliate commission from those sales.]

We’ve gathered together some of the best Quest add-ons and accessories right here, ranging from cords to cases and beyond. 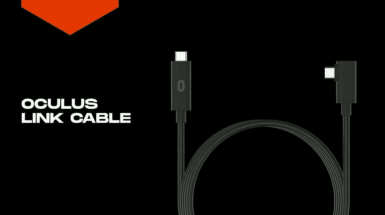 The official Oculus Link cord from Facebook allows you to connect your Quest to a VR-ready PC and play Rift games on your Quest via the Oculus Link Beta, while you remain tethered via the cord.

It should be noted that you don’t need the official cord in order to use Oculus Link — other cords will work too. Originally, only cords that met USB 3.0 specification would work with Link, such as the official one and some others as well. However, now Oculus Link works with any USB 2.0 cord, including the one that comes with the Quest.

However, Oculus do note that using ‘your performance can be improved when switching to a USB 3.0 connection’ — it didn’t give any other specifics beyond that. So, for $79, the official cable is a high-quality, thin and flexible 5 meter optical USB C cord. While it’s expensive, it will likely give you one of the most reliable Link connections available, paired with a super light, long and flexible cord.

However, if you want a cheaper USB 3.0 cord for Link… 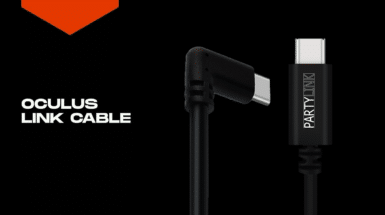 If you don’t want to shell out $79 for the official cable when using Link, but still want the ‘increased performance’ offered by USB 3.0, there are several alternatives you can go with. We wrote about this $20 PartyLink cable that works well, but any reliable brand selling USB 3.0 cables at an appropriate length for Link should work. As long as it is really up to USB 3.0 specification (some cords will say they are, but are actually only 2.0), you should get the ‘increased performance’ while using Link. To ensure you get a cord that meets the right specification, still to well-known and reliable brands — Facebook recommended this cable from Anker as an alternative. 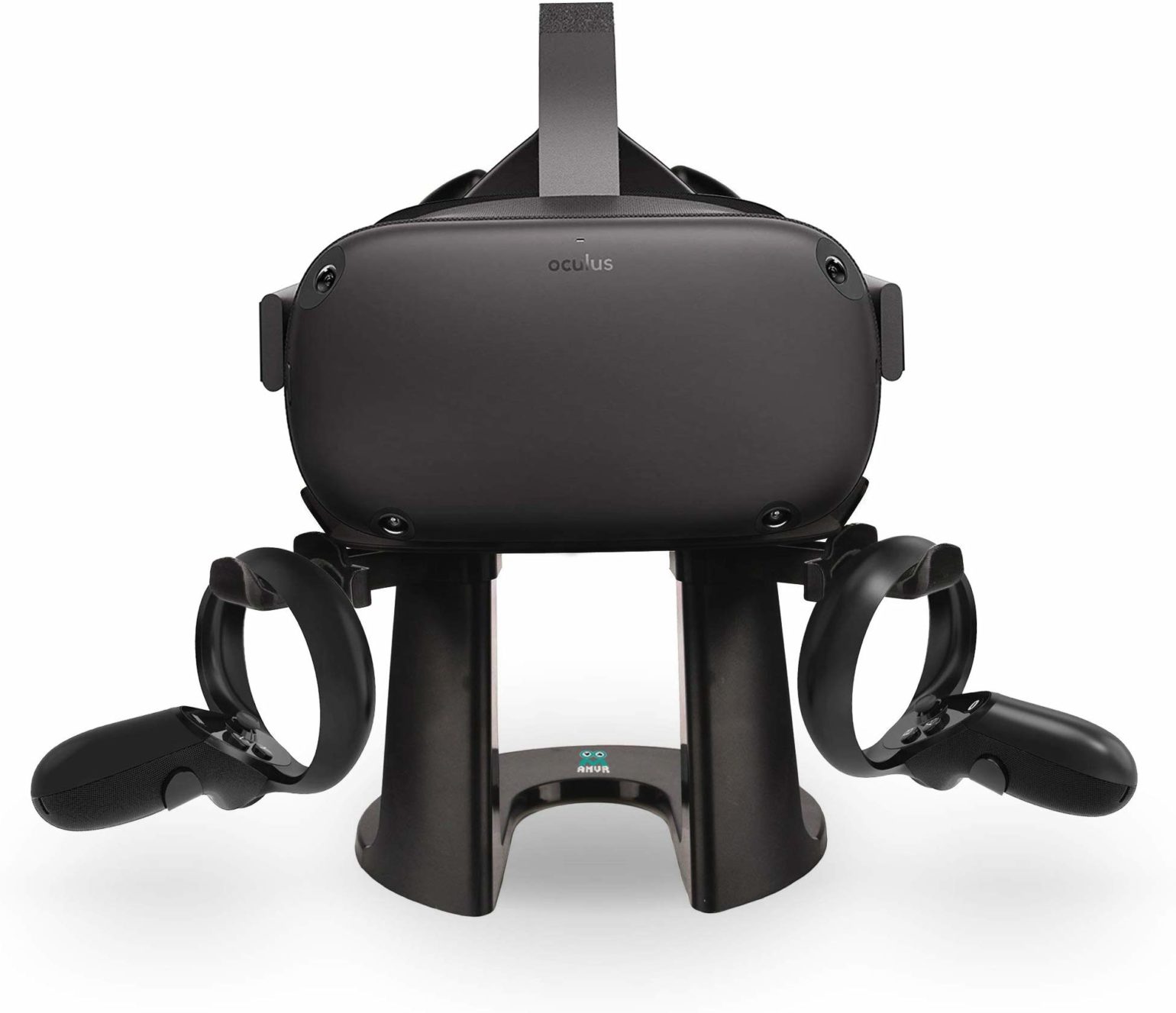 This stand is a great option if you want to both display and store your Quest somewhere central in your house, potentially even next to other gaming consoles or your TV. Some of our staff members tried out the stand and were suitably impressed. It can hold your Quest in the center, with the Touch controllers hanging to the side ready to be grabbed. The good news is that it also works with the Oculus Rift S, if you happen to have both headsets. 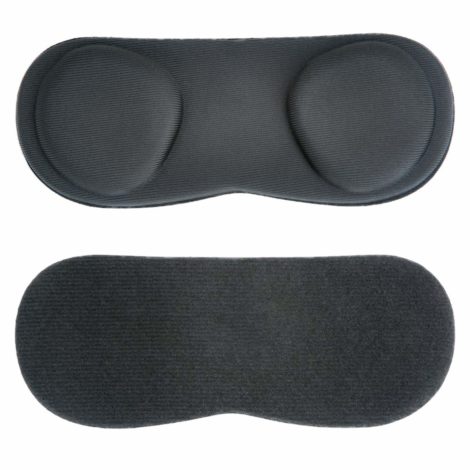 The lenses are one of the most vulnerable parts of the Quest headset — they can be permanently scratched and direct sunlight can be magnified through them, resulting in burnt screen pixels. If you’re looking for something to fit securely into the headset, protecting the lenses, then maybe try this lens protector from Orzero. UploadVR staff have reported it works well for the Quest (and even other headsets) and protects the lenses from dust as well. You may have to turn the headset off fully when not in use if the lens protector activates the headset’s proximity sensor.

The Orzero VR Lens Protect Cover is available for $10.99. 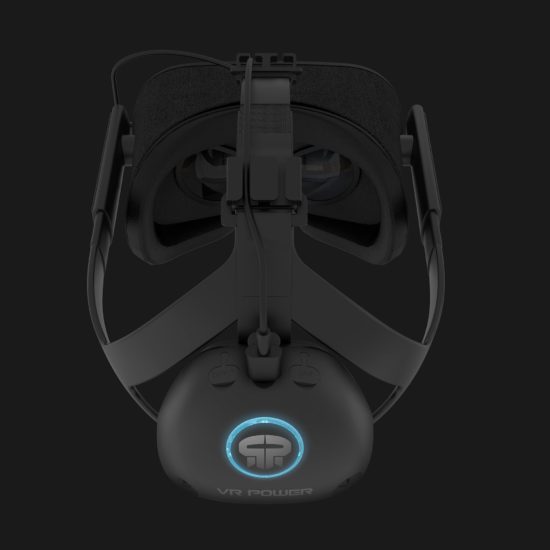 The VR Power acts as a counter-weight and battery pack for the Quest. Strapping onto the back of the headset, it improves comfort by balancing the weight distrubution, while also charging the headset while in use. This lets you stay in VR for much longer than you would with the standard Quest battery, and we were considerably impressed in our full review . It may be the best option if you’re looking for a Quest battery pack.

The VR Power is available from Rebuff Reality for $60, but will often be back-ordered due to high demand.

The Chromecast is a device that allows you to send and play media on your TV from other devices, such as your mobile phone. In this case, a Chromecast will allow you to cast the view from your Oculus Quest onto your TV, so others can watch what’s happening in VR on the TV.

This is a must-have accessory for demoing your Quest, as it allows others to watch what you do in VR and also allows you to watch and instruct others who might be new to the system, as they try it out.

There are two kinds of Chromecasts, the Chromecast and the Chromecast Ultra. The only difference between the two is that the latter allows you to play 4K content. The Quest is not a 4K device, so you probably won’t see any difference when casting the Quest, but if you have a 4K TV then you’re probably better off getting the Ultra so that you can get the most out of other Chromecast media as well.

The Chromecast is typically available for around $35, and the Ultra for $70. For more information on how to use your Quest with your Chromecast, see here. 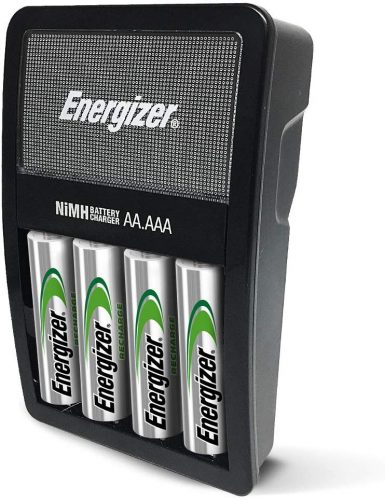 This is less of a specific recommendation of one brand or type or product, but more of a general one. The Oculus Touch controllers use one AA battery each, so if you use  your Quest a lot, you’re going to go through batteries pretty quickly. To save some money long-term, and help the environment, it is worth investing in some quality rechargeable AA batteries.

A pack of 4 rechargeable AA batteries and accompanying charger is only around $14 on Amazon, but there is also a newer kind of rechargeable battery that is even more convenient because each battery plugs directly into a micro USB cable to recharge. We can’t attest to the quality of the energizer pack specifically, but there are many options to choose from at varying prices online. 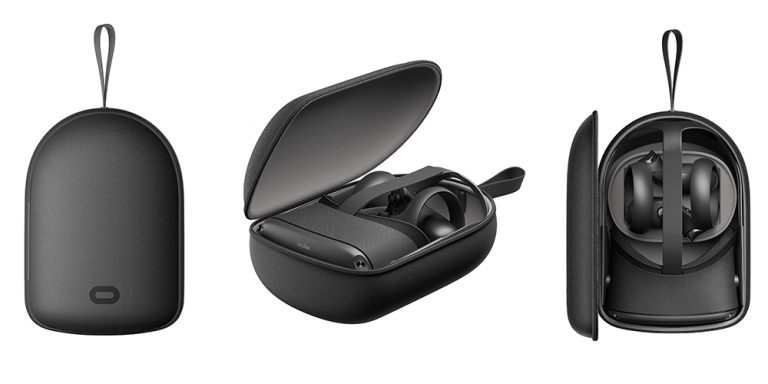 Perhaps one of the most notably absent items from the Oculus Quest box is any form of portable storage for the device. Given that you can damage or scratch the lenses by leaving them exposed, getting a case to hold your Quest in is an absolute must. In this regard, you’ve got a couple of options.

There’s the official Oculus Quest Travel Case from Oculus for around $40, however we’ve had mixed results. Some staff were happy with the case, but others noted some problems with the zipper after very little use.

If you don’t want to go with the official case, we’ve also tried this hard carry case that goes for about $30. Beyond that, there’s a wealth of other case options for the Quest on Amazon. 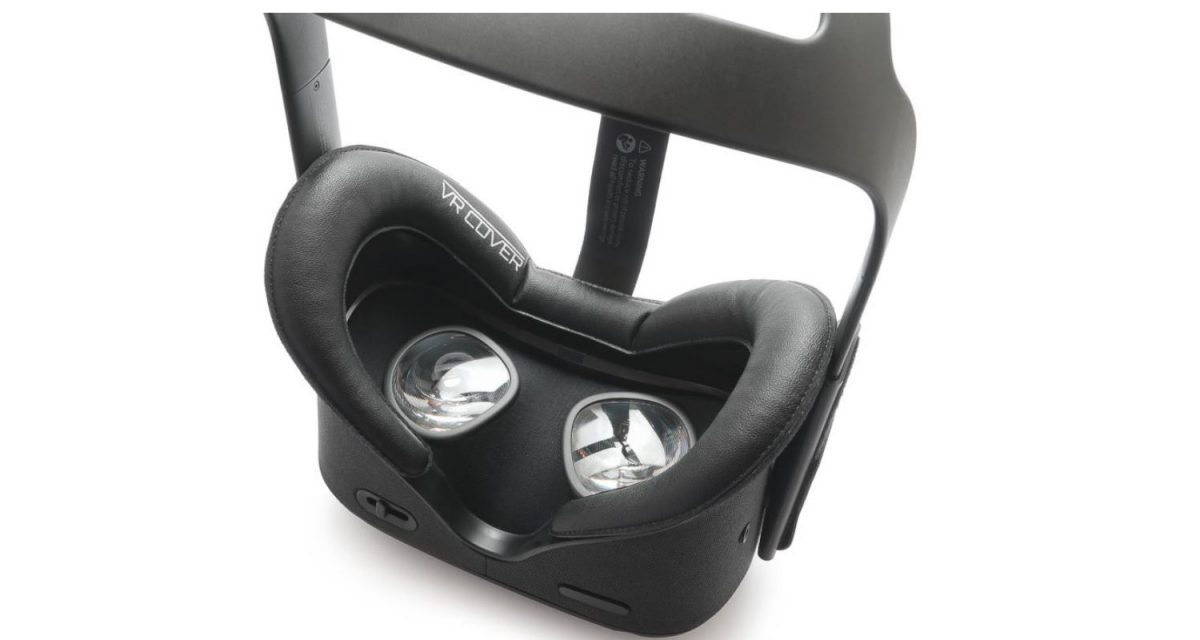 VR Cover is a company that’s been around for some time and known for making accessories designed to make headsets feel more comfortable against the face as well as improve hygiene. We tested their Quest-specific covers and some people on-staff love the added comfort and cleanliness, but some others don’t think it makes the Quest that much more comfortable. That being said, it is good to have these on hand if you plan on exercising and getting sweaty with the Quest – you’ll be able to to quickly swap out the covers when things start to get a bit slippery.

All Oculus Quests include an audio system that releases sound from the head strap area. This system works decently because you don’t have to position anything inside or over your ears to hear immersive sound. Still, a lot of detailed sounds are lost with this system. Did you know, for instance, there are ambient sounds in the home area of Oculus Quest? For $49, Oculus sells official wired headphones that come in two completely separate pieces with very short cords. There are headphone jacks on both sides of the Quest so these headphones are ready-built to plug into both of these ports and provide you a more private and immersive sound experience. 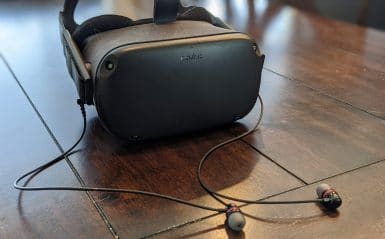 While the official earphones are one option, these Oculus Quest earbuds from Kiwi offer a cheaper alternative with a few sacrifices. Sporting the same dual-cord design as the official headphones, the Kiwi headphones won’t give you the best sound quality around, but they are considerably cheaper than the official alternative. If you want some cheap headphones for your Quest, these are a good option. You can read our full review here.

The Kiwi Oculus Quest Earbuds are available on Amazon for about $20. 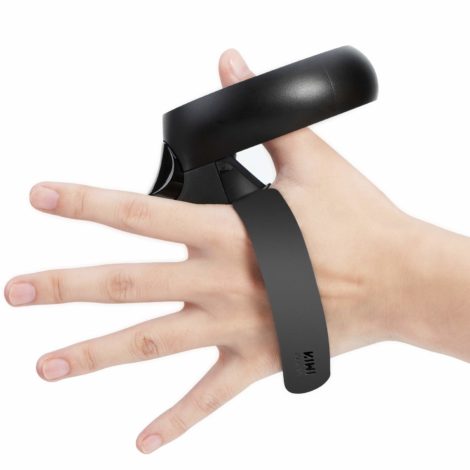 This style of strap modification accessory for the Oculus Touch controllers make them a little bit more like Index Controllers – they’ll stay secured to your hand even if you’re not gripping them. They’re not near as comfortable as the Index controllers but still useful so you’re not constantly actively holding something.

The Kiwi Design Knuckle Straps are available for $19.99, however we’ve also heard good things about the AMVR versions for $30 too. There are plenty of straps in this style available on Amazon. 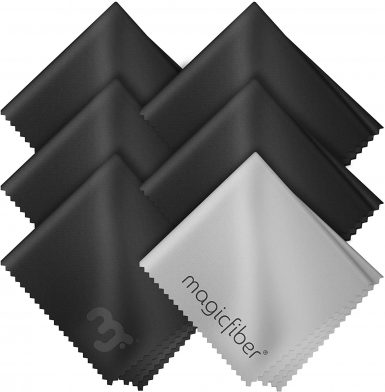 It is a real shame a cleaning cloth isn’t included when you buy Oculus Quest since some other headsets ship with it. Cleaning the lenses can have a dramatic effect on your VR experience and Oculus recommends wiping the lenses down with a dry optical lens microfiber cloth starting from the center of the lens and wiping gently in a circular motion outwards. Do not use liquid cleaners. We haven’t tested these particular lens cloths, but there are many available and this 6-pack from Amazon looks like a good start.

Have you found any other accessories that improved your experience with Oculus Quest please share in the comments.